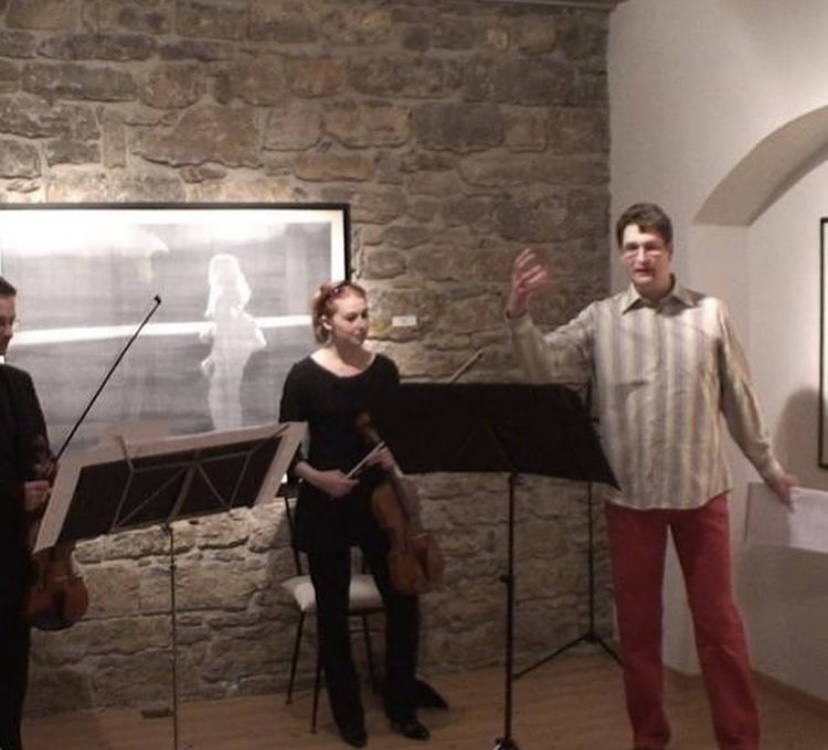 When Rita Ficher-Rohr surprisingly invited me to compose a piece relating to the grey paintings of Gerhard Richter (1973) and the works of Eduardo Ventura, I was in a state of exhaustion. Not least the finishing of my clarinet concert Doppelgänger had cost me a great deal of effort, and I hesitated to accept the commission. On the other hand, I have always admired the many-facetted work of Richter, so I could hardly say no.

One difficulty was reacting with music, which takes place over time, to painting that confronts you with a monolithic force. The idea of how to deal with the monochrome works finally came to me on the Greek island of Santorini, whose nearly monochrome red sandstone impressed me during my hikes. Just as the fine red dust ran through my fingers, I wanted to trace the grey paint surfaces, to feel them tangibly, follow their lines and movements, appreciate the contrast between monolithic form and intimate surface.

The composition’s title, Forest, ultimately alludes to Gerhard Richter’s book Wald (Forest) (2008). The forest – charged with significance in art history and music by works such as Carl Maria von Weber’s Freischütz (The Marksman) – not only carries rich symbolic associations but stands conceptually for undergrowth and complex relationships, and hence for many things I intend in my music, such as an unfolding and interlinking of networks, an extensive range of musical materials, and a growth that even astonishes me myself.

When I met Richter years later at the premiere of my contrabass concert Rinde (Bark) in Cologne, I was as happy as a kid celebrating his birthday.

Translation from German by J.W. Gabriel